Here's the story:
I've been collecting names of authors who are on Twitter for a couple of weeks now. I realized that so many of the people I follow including John Schuh (@MrSchuReads) & Jillian Heise (@heisereads) tweet to authors all the time... Why not me? Why not connect them with my students??

So I began to collect names over winter break in Evernote. I've only had two weeks, and I came up with 57 names. I then looked at my students' book review blog posts, and was able to tweet to SEVEN of these authors. It was this same day (today) that Scott Boylen (@Iowasboy) tweeted out help: Anyone have info on authors who are willing to communicate/Skype/other with YA students (7th 8th gr)?

I had to share my Evernote list! I quickly responded that I'd make it into a Google Doc sometime this week. You guessed it. I didn't procrastinate! And, by the power of Twitter, I saw this screen, just sixteen minutes after I tweeted it out... 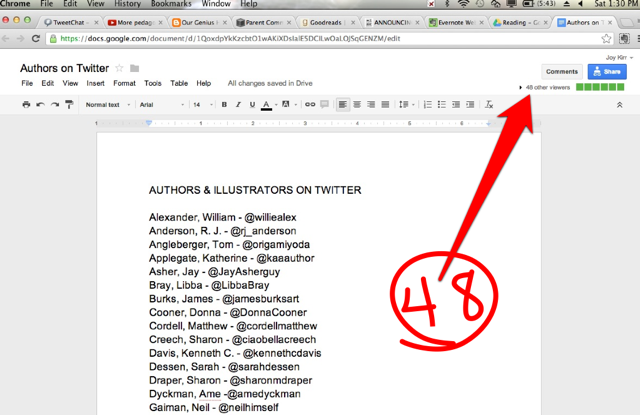 Sadly, shortly after that, it said there were "No other viewers." However, then I received this tweet from Denise Krebs (@MrsDKrebs), who has since put the link on her blog post as well...

The best part, however, is that FOUR authors already replied to my students' blogs... Michael Grant (@thefayz), said of Martina's book review of his fourth book in his Gone series, Plague... "Blood and love. I love blood and love." See Martina's post here. Lisa McMann commented on Ethan's book review of The Unwanteds... She let him know it would be a series with SEVEN books! See Ethan's post and her reply here. Tom Angleberger (@OrigamiYoda) replied to Alyssa here, and Ridley Pearson (@RidleyPearson) replied to Maddy here! THIS is why I use Twitter.

Please, check out this document - Authors on Twitter - and add to it or use it to your advantage!
Posted by Joy Kirr at 2:11:00 PM