From my meager list of 89 books read in 2015 (my personal challenge was 73) - my favorites...
Keep in mind - different strokes for different folks, so share yours in the comments, please!
2014 list HERE!
My Goodreads Year in Books

Favorite Professional Books:
Last year, Choice Words by Peter Johnston was by FAR the best book I've read for the teaching profession. This year, different books hit me from different angles, so I have to give shout outs to a few!

Learn Like a Pirate by Paul Solarz
I may be a bit biased, because I call this man a friend and I've visited his class. Some days I wish his kids came to my school instead of the one across the tracks, but others I'm glad they don't, as I'm not as student-centered as I'd like to be. I've taken many cues from this book and tried them out this year - blog post about that coming in May or June. ;) I've written a piece about it here.

Assessment 3.0 by Mark Barnes
This book pushed me over the edge. I walked into my principal's office with ROLE Reversal, and had this one ready to read next, should the meeting go well and I was let loose to allow one class of students to grade themselves. This one really helped me with the way to give feedback to my 7th graders. I've written about it here.

Best Lessons Series: Literature edited by Brian Sztabnik
Yes, I'm invested in this book (I've got a chapter in it!), AND I think it's great for high school and middle school ELA teachers. I've written about this one here.

Books My Seventh Graders Should Read:
House Arrest by K.A. Holt
Written in prose, it's one young man's journal from the year he was placed under house arrest. When I started reading it, I could feel his fury, and the injustice of his punishment. By the end, I wanted to make sure everything turned out alright for him and his family. I know I want my students to read it when I can't wait for the paperback and have to purchase this one in hardcover for the classroom.

Beanball by Gene Fehler
This is also written in prose, but told from many perspectives - giving the reader a chance to see how everyone feels about this event. A very quick read, this book circulated like wildfire among my kids this year. Sports fan or no, this book about a ball hitting a boy square in the face is not about the injury - it's about the decisions we make in life.

Reluctant Reader (7th grade):
The World According to Humphrey by Betty Birney
Okay, so a reluctant reader himself told me about this book, and I was reluctant to read it... It's so darn CUTE! And it's the start of a series! So what if some of my students read it in 3rd grade?! It brought me back to my Ralph S. Mouse days... Oh, I hope kids still read Beverly Cleary books.

The Dumbest Idea Ever! by Jimmy Gownley
I checked this graphic novel out of my local libary, read it in two sittings, then put it on the chalk shelf for my kids to read during silent reading time (not for check out - I've already had to pay for one library book that was lost). In the two weeks it was up there, maybe ten students read it, and a couple gave book talks on it, too! It's got a strong message of fear of rejection and perseverance.

Fablehaven by Brandon Mull
Since these other two were so very short, here's a longer one for those reluctant readers. I'd seen this book many times, and not opened it - because of the cover. I know. You don't have to tell me. So... when a student this year suggested I purchase it for the classroom, I had to read it first. I like how it starts out as NOT fantasy at ALL. The author takes you in, bit by bit, until you're engulfed in the fantasy world he has set up. Another hook: It's the start of a series!

Graphic Novel:
El Deafo by Cece Bell
I'll be the first to tell you - I have a lot of catching up to do in this genre. And now I have to tell my bias - I went into teaching to teach kids who are deaf or hard of hearing, and I really wish this book had been around in the '90s when FM systems and hearing aids were still as bulky as Cece's were. Yes, this is also autobiographical. I loved the simplicity of how she wrote about her feelings and events in her life. I was worried about how the Deaf community would react to the name of this book, but she does it justice. In fact, in her author's note, she states, "I am an expert on no one's deafness but my own." BAM!

Historical Fiction:
The Invention of Wings by Sue Monk Kidd
We had just finished reading The Narrative of the Life of Frederick Douglass (again), when my co-teacher Yvette suggested this one to me. It is an adult book, but some of our 7th graders could handle if (if they can handle the length). This book was the story of two sisters, and two that could have been like sisters, if times were different. Stories such as these hit hard. Holding this book in class encouraged a conversation with one student about the current gaps STILL between colors in the U.S. Whatever possessed one race to enslave another?! How could they think this was God's will?!


Mystery:
Sadly, I did not read a mystery this year that I think would appeal to many readers... 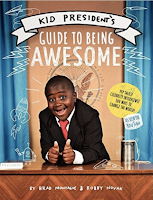 Nonfiction:
I only read two nonfiction books this year that were not for teachers...
The Devil in the White City by Erik Larson
Brain on Fire: My month of madness by Susannah Cahalan

My favorite "How To" book of the year:
Kid President's Guide to Being Awesome
by Brad Montague and Robby Novak
Read it, and then pass it along, just as it asks of you!

Hidden by Helen Frost
The covers for this book are not the best... Anyway, my two favorites are above in the "Books My 7th Graders Should Read" category, but I loved this one, too. One girl is accidentally kidnapped... another tries to help her escape. Both stories are told separately until a few years later when the girls meet at summer camp... The author's note is important, for it gives more hints to the story - as another message is hidden in the book and you need to go through it quickly one more time. This fact had my students in awe as to how difficult this must have been for the author to write.

Science Fiction:
Michael Vey: Prisoner of Cell 25 by Richard Paul Evans
Once one student gave a book talk about it, three more of us were reading this one. Michael stops getting bullied when he... well... when he gives the bullies a jolt of electricity that sends them flying across the field. The witness also has something "electric" in her own life. Just when they start to realize that there's more than one of them, trouble comes to pick them up... This is the start of a series, and many students are now hooked.

Adult (yet classified as Young Adult):
I'll Give You the Sun, by Jandy Nelson
THE BEST BOOK I read this year. I've noticed that some people (who I greatly respect) on Goodreads didn't care for this one, but I'll stand by it as beautifully written. I cannot contemplate writing fiction (growth mindset, I know, I know), and now I don't know how I could write nearly as good a paragraph as this author has done. The writing was so beautiful, the love was so fierce, and I could not get enough of this one. I only hope my students read and appreciate it when they are 42 years old.

The One That's Been on My Shelves for Years:

Dread Locks by Neal Shusterman
Another one I never read because of the cover... until this year. I finally picked it up this year, and didn't want to stop! The new girl in town was so intriguing, with her constant use of sunglasses (even indoors) and her locks of hair that almost seemed to move... Her parents were never around, and she seemed to have plenty of money, yet she didn't seem to care about much. Parker is entranced by her actions with others, and I quickly fell into step. The ending, although abrupt, was perfect for this one. Supposedly the start of a series, I don't know if Shusterman kept going with this one.