Using Explain Everything to Give Feedback 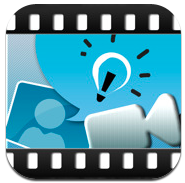 I decided to try giving video feedback for one small piece of writing my students did on notebook paper. We only had 10 minutes to write, and the prompt was to explain their "escape," whether it be a place or an action. I let the idea of video feedback stew in my mind, as I only had twelve to look through this weekend, and then decided to use the Explain Everything app. I could draw right on their work, and then could share a private video with each student.

After a few unsuccessful attempts (and successful mishaps), I decided I needed to keep track of the process I'll go through the next time.

Steps:
1. Take photos of all the writing.
(No need to crop them at this time - you can do that once they're on the app.)
2. Take photo(s) of any rubric(s) you intend to use.
3. Create a document you can toggle to on the iPad. This will be where you will house all of the private links to the feedback you're giving.
4. Open the Explain Everything app.
5. Put a photo of the student's writing on the first slide, cropping when you upload it.
6. Add a slide.
7. Put a photo of the rubric(s) you're using on this slide, cropping when you upload.
8. Optional - create two more slides - exactly the same, just in case you'd like to add something else to your dialogue about the students' writing, or more to the rubric. This is also good if you're working with two standards you'd like to look at separately.
9. Have something else ready that you'd like to be doing while each video is uploading. The upload time depends on how long the piece is, and how long your dialogue is. Average for the few I did today was 7.6 minutes each - for ten minutes of student writing in class. Tip: You could save them all as different names and upload them all after you're done giving feedback, but I didn't want to use the space on my account or on the iPad if I could help it. I'm not sure how much space I have on my Explain Everything account, and I didn't want to reach the end and then pay for more space with this app.
10. If your student's last name is on any photo you've taken, use the pencil tool to cover it.
11. Begin recording - just be normal.
12. Save the recording.
I named it by the title of the piece or assignment, and then added the child's name.
13. Upload the video to YouTube, marking it "unlisted."
14. When it is done uploading, copy the link.
15. Open the document you have for students' links, and add this student's name and the private link.
16. When you are finished uploading, delete all of the slides, and start over. (This is much more efficient than deleting the audio, your mark ups, and the photos of student work.)
17. Begin at step 5 again. You will be able to rename this project with this new student's name when you upload it to YouTube.

Here is an example of one that was turned in with no name:

Why did I choose Explain Everything?
1. I think it's important to use tools I already like when I'm trying something new.
2. I am very familiar with this app, and wanted to see how it would work for this piece.
3. Student writing was WRITTEN, not done digitally, so Google Doc commenting wouldn't work.
4. I wanted to circle and underline and highlight their words.

What worked:
1. I became more efficient as I went along - with the app, and also with my feedback.
2. I became more precise in using words that focused solely on the skills on which I was giving feedback.
3. I did NOT take the time to go back and hear what I said. If it was a one-on-one conference with students, I would not have that luxury, so I didn't use precious time to go back and re-record.
4. I was personal with students... I let them know that I realized this was only a 10 minute writing prompt. I thanked them for sharing them aloud (if they did so in class). I remarked about their "escape," and thanked them for sharing it with me. I encouraged some to put this piece of writing on their blogs.

What the students said:
My question: What did you think of it vs. Google Doc comments?
- "A little better."
- "Once you heard yourself say something, you thought of something else, so you had more comments."
- "It wasn't bad."
- "Gave some good advice."
- "The highlighting, in my opinion, was a little excessive."
- "I think it was better, because you underlined and circled certain words that were good."
- "It was a lot, but it wasn't too much."
- "It gave some feedback, and helpful advice."
- "It took a long time." (5 min)
- "It felt longer, but you also explained more. It explained your train of thought, so I knew what I should do. You were talking out loud, so I could hear what you were thinking about each thing while you were reading it."