The Robot & the Butterfly Catcher

When did we first "learn" that some things are impossible? This is a myth. But why is it that we think this is truth?

My six-year-old niece and nephew (twins) know that nothing is impossible. I was reminded of this the last time I saw them. My husband and I walked in the door, they hurriedly gave us hugs, then ran out the back door. A minute later, we were summoned into the garage to see what surprise they had for us. 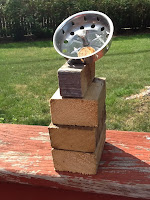 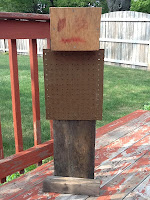 They found materials in my dad's garage or outside, and decided to make things with them. Using glue, nails, and Grandpa supervision, they worked, step-by-step for TWO DAYS on these projects. After the "ooohs" and "ahhhs," we put the gifts on the front sidewalk, then came back inside.

Next, I was strongly encouraged to go upstairs with these two engineers. As we sat down and Robert said, "Now that we're all seated and comfortable, we need to talk," I worried. What were they planning? It turns out, they wanted to create a trophy for Grandma for her birthday. It was to say, "To the best grandma in IL." After taking out all the paper they thought they'd need, Rosann got to work on the face, curling paper hair and using copious amounts of tape. Robert tried to explain to me what the trophy should look like. I finally understood the accordion concept he was getting at, and showed him how it was done. He did it himself, but two of these just wouldn't hold up his next piece of paper.

I was giving up in my head, thinking it would just be topsy-turvy, and that would be okay. Robert wouldn't settle. "I know," he said, and left the room. Turns out, he retrieved Uncle Bob! He knew his mechanically-minded uncle could figure it out for him! The simple solution? Cut the two in half, and make four pillars, instead of just two.

I could go on and on, but it looks as if I already did!

My first point - These kids don't know the word, "impossible." They just don't know the meaning. When will they "learn" that some things are just not possible?

My second point - These children know that all they create is perfect. The pictures they draw could go in the Art Institute of Chicago. The sculptures they make could be auctioned off for high dollars. When do we learn to fear criticism? When do we think our product isn't "good enough" ?

Do my seventh graders give up because "it's impossible" ? When did they learn that they "can't" draw or write or create?  Can I reverse these notions? Can I encourage them enough, give them enough resources, lead them in enough directions so that they think anything is possible once again, and that they DO make a difference?

As we start this school year, I've wondered what will be my focus. I've decided. It's the students. I will make sure they know I think they matter. They will know I believe in them. They will see it in my face, and hear it in my voice, because I will mean it.

How do you let your students know...?
Anything is possible!
You matter!
Posted by Joy Kirr at 3:50:00 PM