Who are Luddites Failing?

My husband is a history buff. It’s a good thing – it means I learn something every now and then! He recently read an article in BBC History Magazine (Vol. 13, No. 5 - May, 2012) titled, “Luddites.” Here’s some of what Charlotte Hodgman had to say (p78): 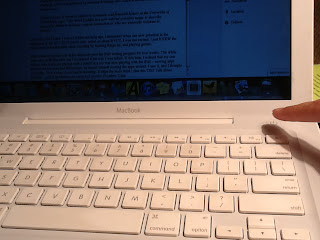 Luddism, a protest movement that arose from the textile trade in Britain 200 years ago, first emerged during 1811, in the Midlands, as a reaction to the replacement of skilled craftsmen with new labour-saving technology. A pattern of public petitioning quickly emerged, which was followed by machine breaking and violence across Britain’s main textile areas…

Richard Jones, a research student in economic and financial history at the University of Cambridge, says: “The Word Luddite has now entered everyday usage to describe those who dislike technology, oppose innovation or who are generally resistant to change…”

I read this, and I knew I was a Luddite not long ago. I remember when our new principal at the beginning of the 2011-2012 school year, asked us about BYOT, I was not excited. I just KNEW the kids would be texting each other, cheating by looking things up, and playing games.

Then I was the chosen one in the district to pilot the iPad writing program for four weeks. The white hairs came with this pilot, but I completed it the way I was asked. In this time, I noticed that my one student who is always playing with a pencil or a toy was now playing with the iPad – moving apps around! As our class had discussions, he busied himself moving the apps around. I saw it, and I thought – Doodler. That’s okay. I can handle doodling. It helps the brain think! (See this TED Talk about doodlers – you’ll be passing out paper and pencils! Doodlers Unite www.ted.com/talks/sunni_brown.html ) But students having their phones in class? For what purpose? Google? Not good enough for me.

Then I read the next line…

(More from Richard Jones…) “In my opinion, however, this is a misreading of the original Luddite motivation… Luddites were motivated by a desire to protect the status quo of their established skilled trades and their positions within those trades… When machinery displaced them, they naturally reacted very strongly.”

Well, then. I was NOT a Luddite, after all… right? I KNEW that technology would not displace me. I had tenure! I was set! I was in like Flynn! I could pass it all up and still teach. No issues. I would not protest the BYOT, I just wouldn’t buy into it.

But then I thought… If I were an administrator, I would not be looking for new teachers that didn’t know how to use technology. And the more I learned from my PLN on Twitter, the more I knew I would be changing the way I taught sooner, rather than later. And you know what else? Go ahead and let students search Google on their phones. What will they find? Not the answers to my tests. No. My tests (what tests??) were not going to have answers on it you COULD Google. They would feature critical thinking. They would have students applying what they knew, not just giving the ages of Ponyboy’s brothers. (Oh, I always despised that question!!)

I think Luddites may be destined to fail, but I think what’s most important is that we’ll fail students if we do not change with the times, and grab hold of what we can to enhance student learning. Technology will continue to grow leaps and bounds, just as it’s done in the past. I need to use the technology to help my students develop their creativity, their critical thinking, their collaboration…

Here’s someone I’ve quoted many times, C.F. Kettering…
Nothing is constant but change.

Let’s be positive role models, and teach our students that we can change along with the times. Let’s help them with the technology as well. Knowing full well they’ll have digital footprint, let’s help them make it a positive one.
Posted by Joy Kirr at 8:32:00 PM