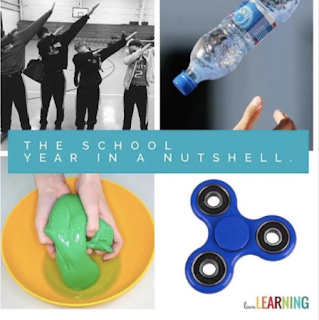 IF you let them drive you up a wall. (Someone help with the source of this image?? I've seen it on Twitter and Facebook w/o any source mentioned.)

The DAY AFTER we had a discussion about fidgets during our team meeting, I started seeing blog posts about them...

This was the first. I couldn't believe this teacher's attitude, and how she was asking parents to quit buying them. This is not one I would ever retweet. It made me embarrassed to be in the same profession.
I'm a Teacher, and Trust Me When I Say that Fidget Spinners Are the Effing Worst

Each student has his or her own take on it. Some are bringing them in just as a novelty (okay, most??), but some are actually FIDGET with them, as this photo proves... 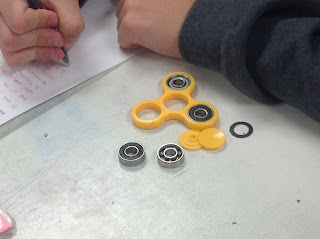 This child likes to manipulate things. And he always has. He is always doing something with his hands. He is the one these things were created for. This is totally allowed in my class, as he is primarily focused on the lesson at hand if I've done a good job that day of making the lesson relevant and/or engaging (to him, at least).

Then this one was brought to my attention, and my ELA counterpart and I figured this would be a good one to discuss as a class, to notice tone, bias, satire...
Those Darn Spinners Are Going to Be the End of Me!!! (Notice the three exclamation points.)

After reading this post, I went with "the girls" to a bridal shower (I thought I was done with those, but I have a HUGE extended family). My sister says she bought a fidget cube for my nephew. GREAT IDEA! He constantly moves his hands together. If he's not doing that, he's most often picking at his fingers. A cube he can manipulate will help him - much like clicking a pen in his hand, but without the noise. His twin sister's teacher banned them. He hasn't said if they're allowed or not, but I'd think he could keep this in a pocket. 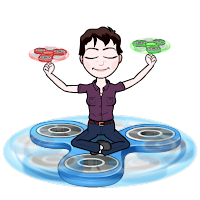 And, of course, a day after I finished reading Instant Relevance by Denis Sheeran, I was connected to his two posts on how to make these relevant in the classroom...
Put a Spin on It
Fidget Spinners Follow Up

The day I published this post (yes, I'm editing right now), another popped up on my Twitter feed. Laurie Lichtenstein takes the view that the newest fad is our currency with our middle schoolers. Use the currency, or be doomed to be upset at each passing fad.
Flipping, Spinners, and Slime: Those Crazy Middle School Fads

The prevalence of spinners - in the time span of just one week! - has made me look even more closely at my lessons for relevance. I have brought up the question "WHY" again and again in the past week, helping students see the reasons for our class activities. And if I could write it better than Doug Robertson, I'd make this post an actual post. However, he has already done so... The Worst Thing about Fidget Spinners

...And why, like he suggests, should we waste any more time or print on such a trivial issue?