Here's to the Crazy Ones

You've seen the ad from 1997 for Apple. If not, take one minute now...
Chapter ten in Shift This! is about resistance.

Resistance from teachers and parents is the hardest to handle. I've written (and will never forget) about when a parent told me (in front of my principal) that "Genius Hour is crazy."

I've seen the way teachers roll their eyes when I share a supposed "crazy" idea. I've heard teacher friends tell me about other teachers who don't like how I run class - even though they've never stepped in it before. And, yes, they're invited any day - especially when I put out our "observe us" sign.

I recently had my hair dyed... blue. This was the first (and probably the last) time I've ever added any color to my "chestnut brown" (as Hubby calls it) hair. I wanted it cobalt blue to match my fun Ford. It came out more of a mermaid or iridescent blue. 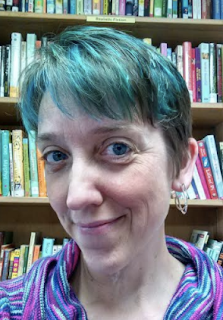 Coloring hair is NOT crazy. It will grow out in no time. Trying new things in the classroom that might benefit our students is NOT crazy. Some people even use the word "innovative."

It doesn't matter, though. I'm SURE some people think what I do is crazy. I used to think that was okay. I had a realization last night. I am now positive that it's good to be called "crazy" for what I do!

Hubby asked me what I think about the teachers who think what I'm doing is crazy.

My response: "They're crazy. They conform."

We sat for a moment, and then busted out laughing. Those words came out of my mouth? I looked up "conform" this morning, and from a simple Google search found "to comply with rules, standards, or laws." Hopefully teachers are conforming in this way!! This meaning, instead, hit me: "to behave according to socially acceptable conventions or standards."

This reminded me of "status quo" - "the existing state of affairs."

Many teachers are NOT happy with "the existing state of affairs" in our schools. The fact that I try "crazy" ideas, along with my gratitude for all I have in my life, are two (of many!) reasons why I am as joyful as I am. Bring on the stares of the blue streaks - today it's a representation of all the "crazy" stuff I've done in my life!

I want my students' education to be BETTER than the status quo. "Here's to the crazy ones: the misfits, the rebels, the troublemakers the round pegs in the square holes, the ones who see things differently..." As long as we're doing what we believe is right, and helping our students learn how to learn, we can change things. "The people who think they are crazy enough to change the world are the ones who do." If we want our students to change the world, shouldn't we be that role model?
Posted by Joy Kirr at 11:01:00 AM