I play by my own rules.

In my last post regarding Twitter, I shared seven lessons I've learned since jumping into the Twittersphere five years ago. When you first get on Twitter, you feel that you "have" to do certain things... such as follow someone if they follow you, or other "rules" I can't remember now. I'm glad I'm removed from those initial feelings!

I thought I'd explain some of my personal rules I've made for myself, and hope to get your ideas, as well, so we can learn from each other the various ideas educators have regarding this swell tool we call Twitter. 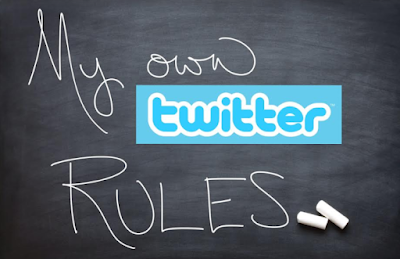 --> I do not always reply right away. Yes, sometimes I shut off technology. For many reasons. If you don't understand this, you should shut it off, too. During school hours, I will not check my Twitter account. The students come before anyone from 7:45-3:30.

--> If your district, school, or class is in a contest, I will vote once for your school - IF I get a chance to look through other submissions. I will not retweet your request, unless followers can see ALL the entries. Why these rules for myself? Because I used to not have so many followers. I used to not be so "popular" on Twitter. I don't think contests should be won because of the person's popularity or connections. Background story: I didn't win a karaoke contest one night in Fox Lake, IL, because I only brought my husband and parents. I didn't know it was decided by popularity vote! I did win a Parrot Bay hat... (That's right. I sing. Martina McBride and Dixie Chicks, Baby.)

--> If someone tags me in a tweet about their Donors Choose project, I do not retweet those, either. I feel I am tagged because I have many followers, and I don't think that's fair to those who are not even ON Twitter (yet). There are many educators at very low-income schools that do not know about the benefits of being connected on Twitter, yet they need just as much (or more) help than those who are. When I go to Donors Choose, I look for schools in the less-fortunate area near where I was raised, and am very selective as to where I donate. I am also selective when it comes to donating to other organizations - I do my research to see where the money goes I imagine donating is very personal for many people, so I will not retweet requests, nor will I put my own requests out there. I understand those who do; I just choose not to share in my Twitter stream. (Added in September of 2018 - I sometimes feel I've gotten more requests for Donors Choose projects since I published Shift This. Just because I do happen to have published a book doesn't mean I have bags of money to share. Giving to charities is a very personal thing, and I have my own favorites for various reasons. Added in 2019 - #clearthelist brings to the front the discussion of equity...)

--> Very rarely do I join a chat at 8pm or later. Another of my rules for shutting off tech - I don't sleep well if my brain is too engaged after 8pm. I've missed many #GeniusHour chats as a result, so I catch the archives. My own state has an #ILEdChat at 9pm - I'll never make that one, as that's when I head to bed. Seriously! I take care of myself by heading to bed at a time that helps me stay healthy. No one wants to see me crabby.

--> I unfollow those who tweet or retweet crude photos. I don't need to see these in my feed. Politics have changed my Twitter feed to include more complaints and crass remarks - no matter what "side" you're on. I'm on the side of children, so I've been unfollowing those that are using or sharing profanity or complaints directed to the world, and not to the source.

Everyone follows a certain set of criteria for tweets and time on Twitter. What's yours? What works best for you?

When you're on your own Twitter space, what are some rules you find yourself following?
Please share yours in the comments below.
Posted by Joy Kirr at 7:54:00 PM