I learned the term "Social Distancing" today. I saw it on Twitter, Facebook, Instagram... Read about it in this great article an old friend shared. Another one popped up on my Twitter feed, as well. Last week big events were canceled, then small events afterwards. Now museums and libraries are closed. I wondered, then, what the restaurant would look like for Dad's birthday. I started getting a bit fearful, so I created something to share on Instagram with my students... 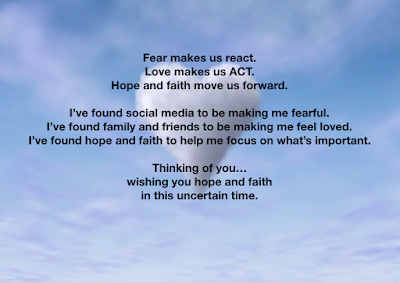 My family got to the restaurant at 4:45, and there was one other larger family and two or three other smaller groups, along with two people at the bar. Here is a sample of the types of notices that are going out... more and more... 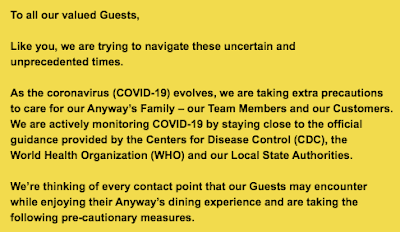 Bob and I washed our hands before we ate, and when we got home, I shared that there was soap in the kitchen and the bathroom. (I won't tell you who did not wash their hands. I was astounded it didn't happen, however.) Then Dad opened presents, we ate cake, and - as my sister was sleeping on the couch (which is something she's been known to do due to her habits) - we finally talked about the elephant in the room. The COVID-19. Mom learned that it was called that because "COrona" + "VIrus" + "Disease" + the year it started. We couldn't agree if it started in October or November, but this news was news to Mom, either way. Dad didn't say much. (He's the one I'm worried about the most, even though both of them are in pretty good health.) My brother-in-law did most of the talking, and my nephew (8th grader) asked most of the questions. My niece (8th grader - how are they so old already?!) observed like she does, taking it all in. I believe the message was "we don't know" and "we'll do what we have to do," even if it means quarantine.

I mentioned I was so glad we were finally talking about it, and my nephew (who, just last month was playing a game to conquer the world with a virus) whole-heartedly agreed. The kids seemed a bit more worried after talking, but I think they appreciated everyone being so open about it. On their way out, I was able to tell my sister that her son is worried about her (a storyline I won't write about - it's too personal). I was also able to give big hugs. Mom said, "Thank you. I needed that."

Tears welled up in her eyes, and I responded by saying, "We'll see you again soon. That's for sure." Her fear makes mine bigger.

We washed our hands again after everyone left.