The Illinois "Stay-At-Home" order starts tomorrow and lasts through April 7th. I expect it to go further, especially if this is their "Day One" of it. Not everyone has been taking "social distancing" to heart.

The "Stay-At-Home" order is not much different from what Hubby and I have been doing. The woman on television today (after Governor Pritzker spoke) called it a "huge sacrifice." Thankfully, I'm not feeling that yet. I worry about those with anxiety during our normal lives. I think they'll feel this hit pretty hard. I've noticed that those with pets seem to smile when talking to or about their pets, so I feel that those individuals will be better off than those without.

Hubby and I have been in awe. It's kind of like summer break here - no kids, relaxing, checking in to emails, watching the news, getting outside... Minus camping. (He does not think it's like summer at all. He says we're stuck in an episode of The Twilight Zone. I'm trying to be positive here.) We've been down and out a bit. Regarding "the world" in general. Regarding the ambiguity of the entire situation.

In "Celebrating in a New Way" from Denise Krebs, she shares how staff at her school celebrated the vice principal's birthday. It made me think of my conversation with my 14-year-old nephew last night. He thinks we'll all be getting together for Easter. I'm doubting that - big time. I'm also wondering if my mom and dad will think it's totally okay to get together. I'm also wondering if it would be totally okay to get together... if none of us have gone anywhere. My gut says "no." My heart says, "We'll be fine." Since Hubby and I are hosting, we're going to have to make the final decision. That sucks. Looks like we'll go with whatever the government decides.

In "Dear Parents, It Will Be Okay" from Jordan Catapano, he shares ten tips for parents at home with their children. The part that got me:
I heard someone say teachers must be glad to have a little time off. Let’s clear something up right now: THEY ARE NOT GLAD. This release from the school day has none of the end-of-year pageantry or we’ll-see-you-after-the-break magic.  ...   Our teachers care about our kids, and the fact that they are apart from them right now is a painful experience.

Today my brain (and heart) have been focused on those who have had their jobs whisked away from them with no no no NO sense of when they'll be heading back to work. I, at least, have a general idea. I, at least, am still going to be paid to work (hopefully). What about those that live from paycheck to paycheck? Those are the people sacrificing. The health care workers and first responders are sacrificing. And those who have the virus due to others not being as careful as we could are sacrificing. 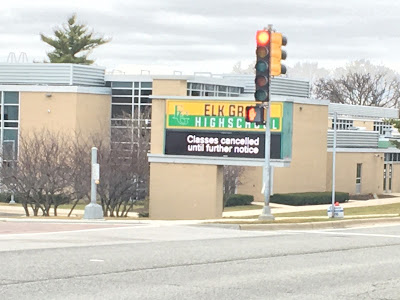 My (Not So) Favorite Things

#SpreadPositivity is making its way through my Instagram through current and former students.

We picked up dinner from Portillo's drive-through tonight.
Posted by Joy Kirr at 5:02:00 PM